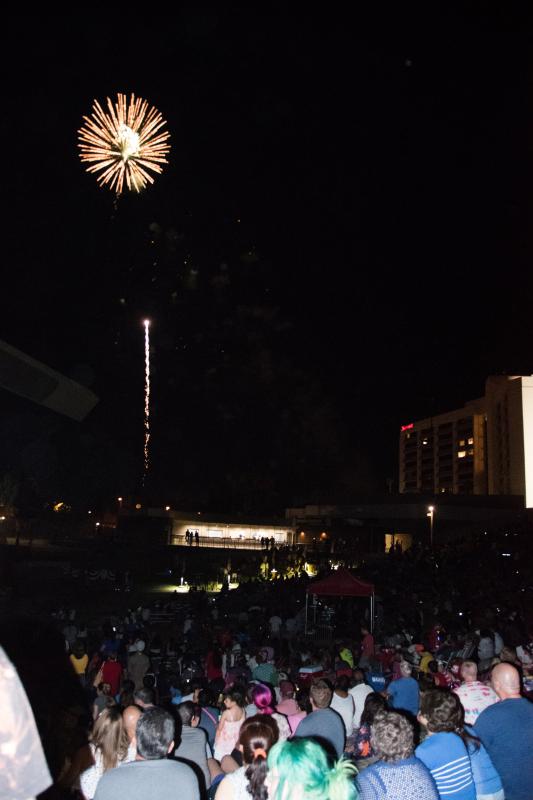 The 10th Titan Solar Power Arizona Celebration of Freedom is guaranteed to be one night of spectacular FREE fun and entertainment. The state's coolest festival to celebrate America's freedom and independence will be held Thursday, July 4 from 6 p.m. to 10 p.m. at the Mesa Convention Center and Mesa Amphitheatre campus, 263 N. Center St., and along Center Street between First Street and University Drive.

The temperatures may be hot, but you can stay cool at the event with KOOL Zones, sponsored by KOOL-FM, that include misting fans, a Mesa Fire and Medical Department spray truck and an air-conditioned Valley Metro bus. There will be lots of activities, displays and events inside Mesa Convention Center.

The Salute to America program at 9:20 p.m., on Stage America, will be followed at approximately 9:30 p.m. by the Fireworks Extravaganza. The fireworks will be more spectacular than ever with bigger shells and a bigger finale. The fireworks, as is tradition, will be accompanied by patriotic music.

One of the new attractions for the 10th year of the event is the Let Freedom Ring Laser Light Show inside the Mesa Convention Center. There will be three 20-minute shows at 7 p.m., 8 p.m. and 9 p.m. featuring spectacular laser displays, photos and patriotic music.


Back by popular demand for the second consecutive year is the Patriotic Superhero Stunt Show. It features professional BMX stunt riders performing amazing stunts and jumps on customized ramps located near the All American Food Court. The riders are the top talent from right here in Arizona and you don't want to miss the awesome finales! Performances are scheduled at 6:30 p.m., 7:20 p.m. and 8:10 p.m.

The Freedom Express trackless train will offer free rides to children and adults.

BYOB: Bring Your Own Bottle. Stop by the Water Bottle Refill Station located outside Mesa Amphitheatre and fill up your water bottle for FREE! Courtesy of City of Mesa Water Resources, you can stay cool and hydrated while you enjoy the celebration.

Mesa Convention Center will host a historical presentation of the flags of the United States along with the Hall of Flags featuring flags from every state and our US territories.

Fallen Soldier Memorial is a breathtaking memorial honoring the Arizona fallen heroes from the war on terrorism in Iraq and Afghanistan. The memorial will be located inside Mesa Convention Center.

Patriotic Military Showcase allows you to get up close and personal with a variety of military vehicles and learn more about how you can support our troops. The display will include a replica of the U.S.S. Arizona and Charlie Chopper, now based in Mesa, which flew combat missions during the Vietnam War.

Inflatable replicas of our national monuments, including the U.S. Capitol, White House, Washington Monument and Independence Hall, will be placed throughout the Convention Center campus. The replicas will remind you of our great heritage and allow you to enjoy some great photo opportunities.

Several Grand Prix racing cars will be on display to promote the Riverview Grand Prix at Mesa scheduled for spring 2020.

A raffle to benefit Titan Solar Power Charities is being held inside Mesa Convention Center. Visit each charity's booth for a chance to win prizes! The charities are 1Mission, Feed My Starving Children, America's Hope, Lupus Foundation of America and Child Crisis Arizona.

America's Arts & Culture Showcase will have crafts and displays from the i.d.e.a. Museum and Arizona Museum of Natural History. There will also be a chalk artist who will invite kids to help her create a patriotic mural.

Tailgate Zone, located in the grass next to Stage America, will offer plenty of games for adults and kids to enjoy such as a radar speed pitch, tee ball, field goal kick and cornhole toss.

Celebration Splash Zone will have numerous inflatables and soak zones so you can have fun and cool down. It includes The General, a giant red, white and blue waterslide for the bigger kids. There is a height requirement to ride it.

FREE parking is available in all lots and on-street parking areas throughout downtown Mesa. ADA parking is in the lot at the northeast corner of Martin Luther King Jr. Way (MLK Way, formerly 3rd Place) and Center Street. Only vehicles with appropriate stickers, license plates or hangtags will be allowed in the lot.

The following streets will be closed or restricted from 5 p.m. Wednesday, July 3 to 5 a.m. Friday, July 5:

Hibbert between 2nd Street and University
no access permitted

3rd Place between Pasadena and Pomeroy
no access permitted


Traffic will be detoured around the event via 1st Street, Country Club Drive, University Drive and Mesa Drive.

Passengers can use light rail into downtown Mesa, exit at the Center and Main Street stop and travel north just two blocks on Center Street to reach the event.

Light rail will operate on the Sunday schedule for the 4th with enhanced service beginning at 5 p.m. The last westbound train will depart Gilbert Road at approximately 12:35 a.m.

Buses will be running on a Sunday schedule, except for Route 40 - Main Street.
Route 40 - Main Street will have added trips every 30 minutes until 11 p.m. eastbound to Superstition Springs Transit Center, and westbound to the Price and Apache Park and Ride in Tempe. This route also connects with light rail at all light rail stations in Mesa between Gilbert Road and the Sycamore Transit Center.

Information about bus service and light rail service is available at www.valleymetro.org or (602) 253-5000.

For more information about the Titan Solar Power Arizona Celebration of Freedom, including a complete list of items you can and cannot bring to the event, visit www.azcelebrationoffreedom.org.