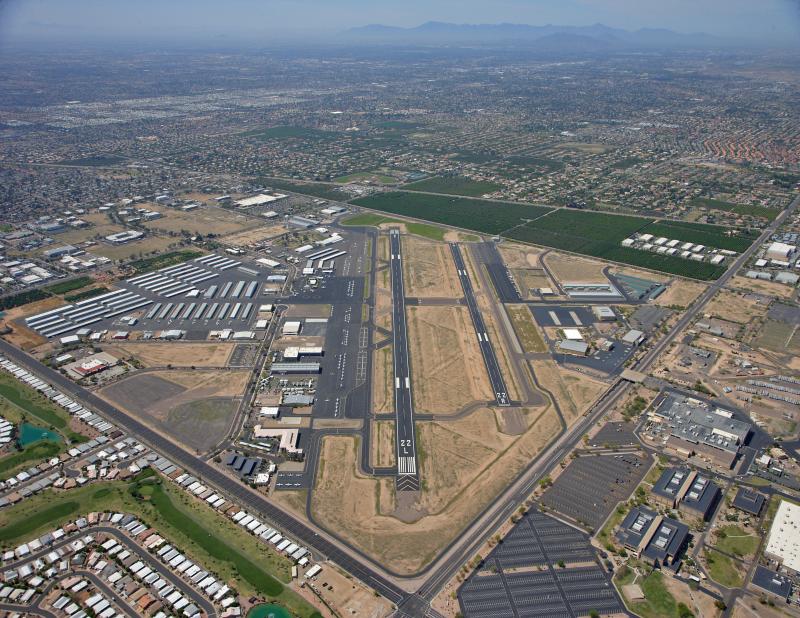 Construction is slated to begin this fall at the City of Mesa's Falcon Field Airport on two acute angle taxiway exits that will allow pilots to exit the airport's north runway (Runway 4L/22R) more quickly and safely. The improvements also will help air traffic controllers to more efficiently manage aircraft traffic at the nation's fifth most active general aviation airport.

The taxiway exists are part of Falcon Field's eight-year Capital Improvement Program. Currently aircraft can only exit the north runway in the middle or at both ends. This project will improve operational safety and efficiency by allowing aircraft to exit the runway more quickly after landing using the two new exits. Combs Construction Co. was awarded the construction contract by the Mesa City Council at its Aug. 26 meeting.

"The City continuously plans for upgrades to the airport's facilities to ensure a pleasant experience for our customers," Airport Director Corinne Nystrom said. "Part of this experience is being able to land quickly upon entering Falcon Field airspace. These new exits will enable aircraft to move quickly from the runways after landing to accommodate incoming arrivals."

The City has received more than $1.3 million in grant funding from the Federal Aviation Administration (FAA) for the project, which accounts for 91.06 percent of total project estimated costs. The City also has applied for a $61,239 construction grant from the Arizona Department of Transportation (ADOT), which accounts for approximately 4.47 percent of total project costs. Falcon Field will fund the remaining approximately 4.47 percent of project costs. Design of the project was funded with an ADOT grant.

"We are fortunate to be awarded this FAA grant funding," Nystrom said. "We are eager to begin construction with minimal inconvenience to our customers."