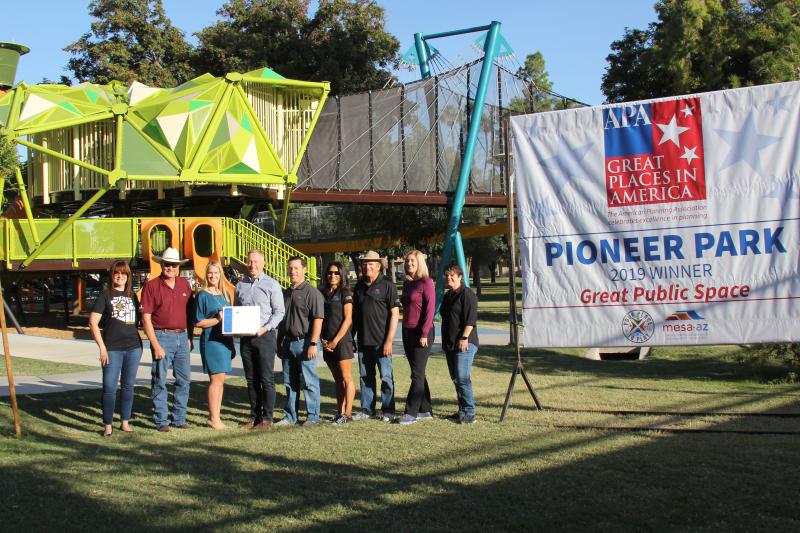 "So many Mesa families have been coming to Pioneer Park for generations," Mayor John Giles said. "From the days of playing on the historic train engine to the amazing new playground structures that look and feel like playing in the trees, Pioneer Park is the place our community gathers. I am so proud that the diligent work in both preserving the historic aspects of the park while ushering in a new generation of fun is being recognized nationally by the APA as one of six Great Public Spaces."

APA's Great Places in America program recognizes the streets, neighborhoods and public spaces in the United States demonstrating exceptional character, quality and planning--attributes that enrich communities, facilitate economic growth, and inspire others around the country. The Great Neighborhoods, Great Streets and Great Public Spaces of 2019 are 13 places that are unique and exemplary in their success stories of revitalization, cultural identity and strong community connection.

"The public spaces recognized this year demonstrate the importance of planning in creating welcoming, multi-use spaces for the entire community to enjoy and come together," said Kurt Christiansen, FAICP, APA president. "Pioneer Park is a national example of how to balance historic character with the evolving desires of the community."

Pioneer Park, anchoring one end of downtown Mesa, Arizona, had fallen into a period of disuse and decay where illegal activities were pushing out appropriate family-focused park use. Many learned to avoid the park altogether, until long-time residents decided to come together to reignite the history and beauty that had made Pioneer Park a once-beloved community space. Community engagement was critical in striking a balance between old and new. Through careful planning, the project managed to preserve historic elements like the train engine, monuments of Mesa's founders, the rose garden and the horseshoe courts, while also enticing visitors with new features. Pioneer Park is now a thriving public space that is home to a surge of new community events, and it stands as a testament to the value of a truly engaged community planning process.

The community will come together to celebrate Pioneer Park's designation as a Great Public Space in America on October 12, 2019 at 8 a.m. during the Mesa Farmers Market and Flea in Pioneer Park.

Since launching the Great Places in America program in 2007, APA has recognized 303 neighborhoods, streets and public spaces around the country. Designees are selected annually and represent the gold standard for a true sense of place, cultural and historical interest, community involvement, and a vision for the future.

For the sixth year, members of the public can suggest their favorite public space, neighborhood, or street to earn a "People's Choice" designation. Throughout October, individuals can offer suggestions via APA's social media channels using the hashtag #APAgreatplaces. APA will select five finalists that the public can vote on via APA's website. The "People's Choice" winner will be announced Oct. 30, 2019.

The American Planning Association is an independent, not-for-profit educational organization that provides vital leadership in creating great communities for all. APA and its professional institute, the American Institute of Certified Planners, are dedicated to advancing the profession of planning - physical, economic and social - to foster quality of life for all residents. The 45,000 members work in concert with community members, civic leaders and business interests to create communities that enrich people's lives. Through its philanthropic work, the APA Foundation helps to reduce economic and social barriers to planning. APA has offices in Washington, D.C., and Chicago. Learn more at www.planning.org.