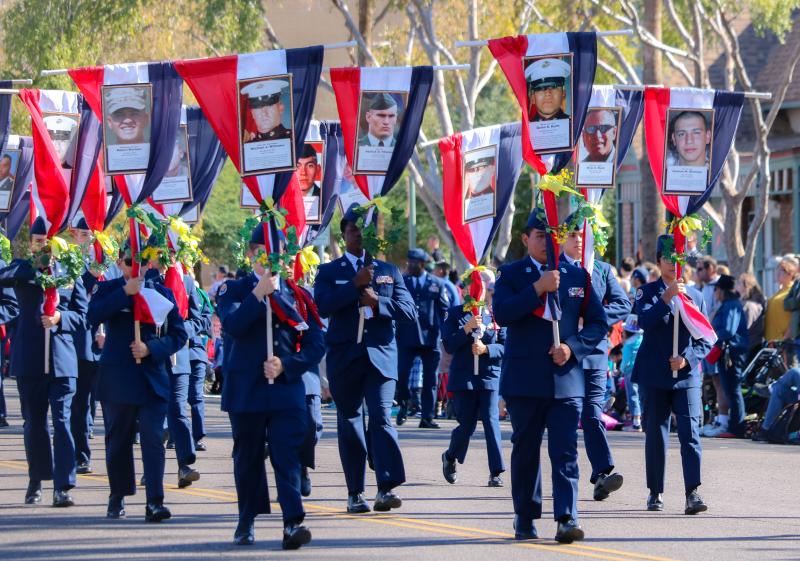 This year's parade has the theme "Commemorate and Celebrate" to pay tribute to two significant mile markers in history: the 75th anniversary of D-Day and the 100th anniversary of observing Veterans Day, established in 1919 as Armistice Day. This year's grand marshal is retired Lieutenant Henry DuBay. He signed up for a new pilot training program shortly before Pearl Harbor in 1941 and flew numerous missions, including during the Normandy Invasion or D-Day and the Battle of the Bulge. DuBay, who is now 95, later worked for NASA on the Apollo Project. More information about the parade is available at www.evvp.org.

Prior to the parade, at 10:45 a.m., a brief program will recognize Veterans for their service to our country. It will include remarks from U.S. Representative Andy Biggs, Mesa Mayor John Giles and Gilbert Vice Mayor Eddie Cook.

The following streets are scheduled to be closed for the parade:

University Drive will reopen to through traffic at Center Street at approximately 12:30 p.m. All streets should reopen by 2 p.m. Traffic can detour around the parade route by using Main Street, Mesa Drive, Country Club Drive and Brown Road.

The City of Mesa offices will be closed Nov. 11 in observance of Veterans Day. Trash and recycle barrels will be on the normal collection schedule. Residents should have their containers out no later than 6 a.m. Bus and light rail routes will operate on their regular schedules, with the exception of Express and RAPID commuter bus services which will not operate that day. The BUZZ circulator bus, Route 30 University Drive and Route 120 Mesa Drive routes will be detoured during the parade. Visit www.ValleyMetro.org for details.

The Mesa Arts Center, Mesa Contemporary Arts Museum, the Store, box office and administrative offices will be closed. The Arizona Museum of Natural History and i.d.e.a. Museum will also be closed Nov. 11.

Another Veterans Day observance in Mesa is the Royal Air Force Cadet Memorial Service Sunday, Nov. 10 at 10:45 a.m. at the Mesa Cemetery, 1212 N. Center St. The service, presented by the Commemorative Air Force Airbase Arizona, honors the 23 British cadets and one American pilot killed in air accidents during Falcon Field's four years as a training facility for U.S. and British fighter pilots during World War II. Those individuals are buried in a special section of the Mesa Cemetery. This observance has been held in Mesa annually for more than 30 years.