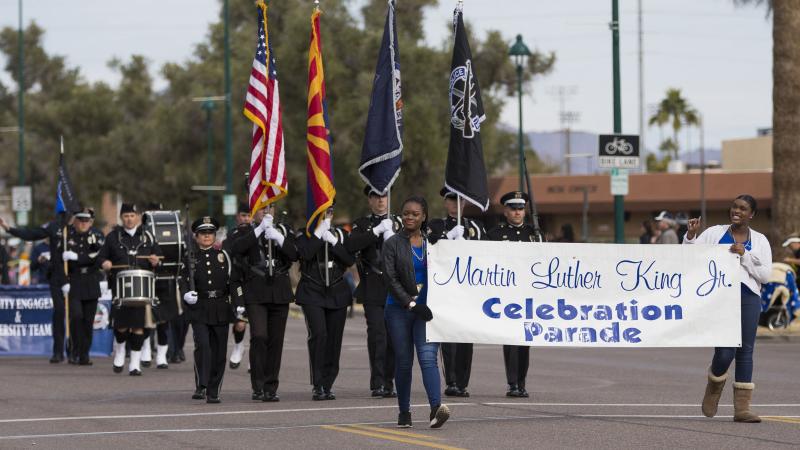 The East Valley Dr. Martin Luther King Jr. Parade will be held from 11 a.m. to 12 p.m. The parade will begin at the intersection of Center Street and MLK Way and will travel south on Center Street to First Street, then travel west on First Street and conclude at Robson. The parade will include Mesa Councilmembers, Mesa Police Department, Mesa Fire and Medical Department, marching bands and community leaders and local organizations.

The 2020 Grand Marshal is Reyna Montoya, founder and CEO of Aliento. Through youth-led arts and healing workshops, leadership development and community organizing, Aliento transforms trauma into hope and action for those most impacted by the harms associated with lacking an immigration status.

Following the parade, there will be a community festival from 12 p.m.to 4 p.m. This will include a brief program at 12:30 p.m. near Pepper and Macdonald honoring the work and legacy of Dr. King.

The following streets are scheduled to be closed for the parade:

Most streets should reopen by 2 p.m. Macdonald, which will be closed between 1st Street and Main Street for the festival, will reopen by 7 p.m. Traffic can detour around the parade route by using Main Street, Mesa Drive, Country Club Drive and University Drive.

The City of Mesa offices will be closed Monday, Jan. 20 in observance of MLK Day.

The closure includes libraries and the Webster, Jefferson and Eagles recreation centers.

Trash and recycle service will be on the normal collection schedule but residents should have barrels on the curb by 6 a.m.

Between 5 a.m. and 2 p.m., the Downtown Buzz will not operate on Center Street between Pepper and University for the parade. Please board the Buzz on southbound Centennial Way or northbound on Center Street at Main.

Between 5 a.m. and 2 p.m., Route 112 northbound to Country Club and Min Street will operate normally on Main. It will turn east (right) on Main Street and deboard passengers in front of Pedrito's Taco Shop to allow riders to connect with light rail.

Mesa's annual MLK celebrations were created after residents, in 1996, voted to establish a citywide holiday recognizing the leadership of Dr. King. For more information on the MLK celebrations, visit www.mesaaz.gov/mlkparade.