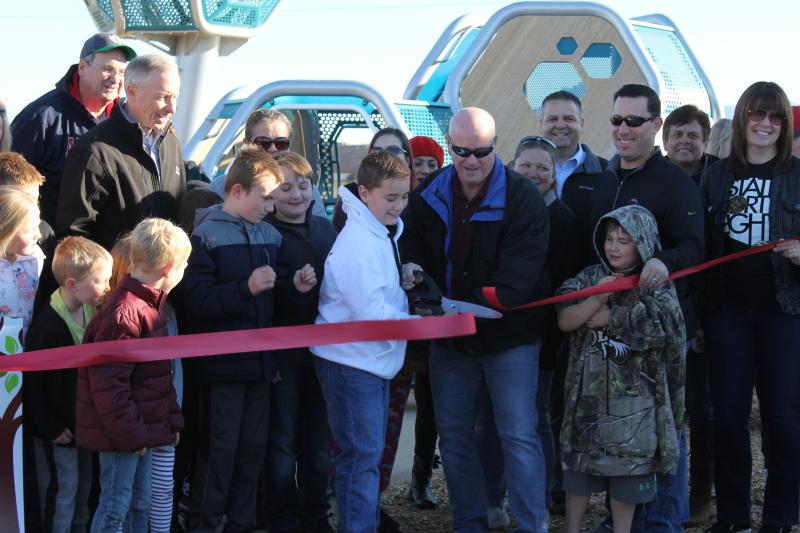 A ribbon cutting ceremony was held this morning to officially open Signal Butte Park, 11132 E. Elliot Road. The new park features a unique custom made playground, four ramadas, and a one-mile lighted asphalt walking path loop along the east, south and west sides of the Signal Butte Water Treatment Plant. Siphon Draw Wash runs through the park and is almost always running with water, creating a riparian area people can enjoy. In addition, the basins in the park will handle regional storm water flow to ease flooding on the roadways.

"Mesa is known for being home to a number of outstanding parks and Signal Butte Park certainly boosts that reputation," Mayor John Giles said. "We know how important outdoor gathering spaces are to our residents and I'd like to thank them for their overwhelming support of the bonds that helped fund this project."

Because the project met the needs of three different City of Mesa departments, funding for Signal Butte Park was from the 2012 Parks Bond, 2014 Water Bond, Highway User Revenue Fund and the City Transportation Fund.

"The voters of Mesa clearly told City leaders that parks are an important part of our communities, and southeast Mesa and its growing population have been underserved on park space. Signal Butte Park is an important new piece of our community and I am very happy to the cut the ribbon on the first phase of this tremendous addition to the area. It will be a destination for kids of all ages to go and have fun," Councilmember Kevin Thompson said.

The first phase of Signal Butte Park is approximately 30 acres. The second phase, which is expected to be completed in 2023, will include a bridge over the wash and a BMX track or trail for nonmotorized dirt bikes. Funding for the second phase will be from the 2018 Parks Bond approved by Mesa voters.