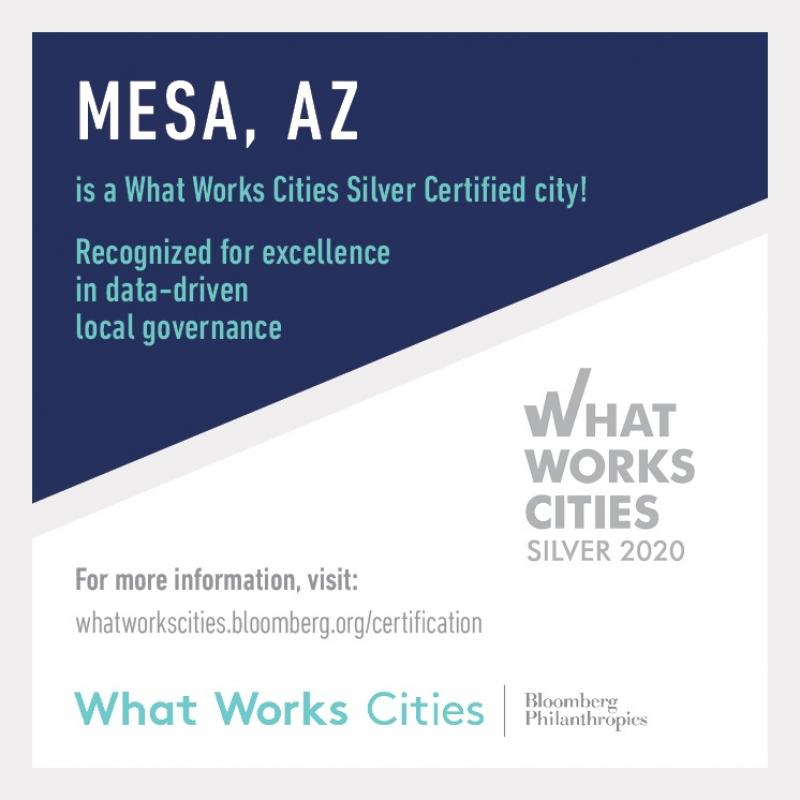 The City of Mesa has earned 2020 What Works Cities Silver Level Certification, one of only 16 cities in the United States to earn silver status. What Works Cities Certification evaluates how effectively cities are managed by measuring the extent to which city leaders incorporate data and evidence in their decision-making against a national standard of excellence. WWC is a national initiative launched by Bloomberg Philanthropies in 2015.

"Mesa is a What Works City and I'm proud of the strides our city has made when it comes to using data to make important decisions for our residents," Mayor John Giles said. "From deciding where to locate our next fire station to how we allocated Federal CARES Act funding, data plays a major role in how we manage resources."

Over the past year, the City has demonstrated measurable progress on foundational data practices, representing Mesa's commitment to advancing how data is used to better serve residents. The criteria assessed around What Works Cities Certification have proven to be critical in Mesa's current response and recovery efforts to the COVID-19 pandemic, including the creation and implementation of the Mesa CARES initiative. The City used survey data from a needs assessment of residents and businesses to get a better understanding of current needs in the community to help us grow services and programs as federal funds became available.

Mesa has used data analysis and predictive modeling to help the Mesa Fire & Medical Department determine the most effective location for a new fire station, to improve the average emergency response time and to launch initiatives to reduce emergency responder fatigue.

The City's use of data analytics is also crucial to the utility rate-setting process. Mesa is able to more accurately forecast consumption and usage based on seasonality by leveraging statistical forecasting techniques, which informs and improves the process that has a direct effect on residents.

About What Works Cities:
What Work Cities, launched by Bloomberg Philanthropies in April 2015, is a national initiative that helps cities use data and evidence more effectively to tackle their most pressing challenges and improve residents' lives. It is one of the largest-ever philanthropic efforts to enhance cities' use of data and evidence. Through the initiative's expert partners, cities around the country are receiving technical assistance, guidance and resources to succeed in making more informed decisions, tackling local challenges, and delivering more effective services and programs for their residents. Cities in the What Works Cities network also gain access to a collaborative network of peers in cities across the country. For more information, visit whatworkscities.org.